David Williams Moyes is a Scottish professional football Manager that was born on the 25th of April 1963. David Moyes made 540 league appearances as a centre half in a playing career that began with Celtic,where he won a championship medal. He then played for Cambridge United, Shrewsbury Town and Dunfermline Athletic before ending his playing career with Preston North end.
The 2013- 2014 season was Manchester United's 22nd season in the premier league and their 39th consecutive season in the top flight of English Football.David Moyes was appointed as United Manager's after taking over from Sir Alex Ferguson,who retired after 27 years in charge.

David Moyes inherited a club,that has just won their 20th title under the legendary Sir Alex Ferguson. Despite winning the community shield,Under Moyes the club was struggling in the league and endured some of their worst results since the end of the 1980s.
The bad games of David Moyes are as follows: On the 8th of March 2014,a premier league fixture between United and Liverpool at Old trafford ended in a 0- 3 loss at home. The second bad game under David Moyes was a Championship's league fixture btw Olympiakos and Manchester United. The game ended in a 2-0 loss for United at Olympiakos.
The third game was not really a defeat,but a disappointing performance at Old trafford between United and Fulham.The game took place on the 9th of Feb,2014.It was expected that United should win the game,but as bad as it was,it ended in a 2-2 draw game.
The fourth game was so painful because David Moyes broke a bad record at Old Trafford.Newcastle broke a record that was made in 1972,that was the last time they won United at home. On the 27th of Dec 2013 at Old Trafford,Newcastle rewrote the record that they made in 1972,by defeating United by a lone goal at home.
The fifth game and also the game that started it  all under David Moyes was the loss to Manchester City at the Ethad stadium. On the 22nd of Sept 2013,City defeated United by 4 goals to 1.David Moyes first trip to the noisy neighbours ended in humiliation.The limp 2-0 defeat away at Everton proved to be the last straw for the Glazer family,who had until then remained behind their beleagured Manager,but the manner of the loss,following on from 2 positive premier league victories over Aston Villa and Newcastle,surely proved that the club was not heading in the right direction under the 50-year old.

,with four games left,David Moyes was sacked as United's Manager less than a year into his six-year contract.Ryan Giggs was placed in charge for United's remaining games,from which they collected seven points.
A manager that inherited the premier le

Stephen Keshi:The Player and The Coach. 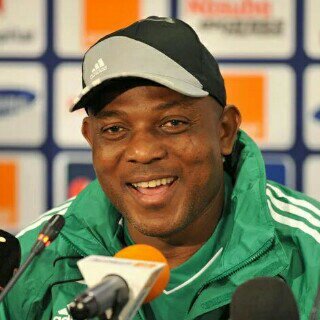 In the International scene,he played for the Super Eagles of Nigeria from 1981- 1995. The Big Boss as he was fondly called made an appearance 64 times for Nigeria National Team and scored 9 goals.
Stephen Keshi was part of the squad that were runners up in the Algiers 90 Nations Cup. He lifted the trophy in 1994, when the Super Eagles defeated Zambia in Tunisia 94,both 2 goals were scored by Emmanuel Amuneke.

His Coaching Career can also be explained in this manner. He coached Togo from  2004- 2006,after qualifying them for the World Cup in Germany 2006. He was promptly replaced by Otto Pfister prior to the World Cup Finals. He was reinstated in 2007 and sacked again in 2008. The Big Boss was appointed as Manager of the Mali National Football team in April 2008 on a two-year deal and was sacked in January 2010,after Mali's exit in the group stages of the African Cup of Nations.

Keshi became the Coach of the Super Eagles in 2011.He led Nigeria to qualification for the 2013 African Cup of Nations,which they went on to win, defeating Burkina Faso by a lone goal in the final.

On the 16th of November 2013,Stephen Keshi qualified the Super Eagles for the 2014 World Cup held in Brazil after defeating Ethiopia 4- 1 on aggregate in a play-off. He is the First African Coach to qualify two African Nations( Togo and Nigeria) to the World Cup.
After Nigeria's exit from the World Cup in 2014,Keshi's contract with the Nigerian Football Federation(NFF) expired and was not renewed.

In Conclusion,Stephen Keshi is the secound African after Egypt's Mahmoud El-Gohary to have won the African cup of Nation both as a PLAYER and a COACH.
Sadly,Stephen Keshi passed away on the 8th of June,2016 after complications of  cardiac arrest. He would always be remembered by both the PLAYERS that he played Football with and the ones he COACHED.
He was indeed a PLAYER and a COACH.

Lionel Andres leo" Messi who is from Argentina and a professional footballer was born on the 24th of june,1987. We all know that (Leo Messi) plays for  Barcelona and he is also the skipper of the Argentine National Team.
Messi started his footballing career at the age of seven(7) when he started playing for Newell's old Boys in his native Country to the age of (13) in 2000.
Barcelona Football Club saw the potentials in Messi and adopted him as a kid player from 2001 to 2004.
He joined the Batch C players in Barcelona from 2003- 2004.He made 10 appearances and scored 5 goals.In 2004,because of his(Messi) rare talent,he was drafted to the Barcelona B side under Pep Guardiola,he made 22 appearances and scored 6 goals. From that time on,he has become part of the Barcelona squad.Since 2004 till date for the Barcelona team,he has scored 312 goals after 348 appearances.
He (Messi) was part of the Fifa U- 20 World cup team that won the gold medal in 2005.He was part of the Beijing Olympic team that defeated Samson Siaasa's under 23 team in the Final.
Lionel Messi is the only footballer in History to win five Fifa Ballon d'or, four of which he won consecutively,and the first player to win three European Golden shoes.
He has won 8 la liga titles with Barcelona,4 UEFA champions league titles,as well as 4 Copas del Roy.He is a prolific goal scorer.He has scored 50 goals in a season with Barcelona,a calendar year(91) goals, a single season (73) goals and most championship league season(5).
Diego Maradona said of him"These is my successor".His style of play, left footed dribbler reminds one of Diego Maradona in the 1978 World Cup hosted in Argentina and the 1986 World Cup played in Mexico.
Lionel Messi is such a fantastic Player and very rare in his generation.
Christiano Ronaldo is a Portuguese professional Footballer who was born on the 5th of February 1985.He presently play for Real Madrid Football Club and the Captain of the Portuguese National team.He is the first player to win four European Golden shoe awards .With Manchester United and Real Madrid,Ronaldo has won three premier league titles,one la liga,one FA Cup,two football leagues Cups,two Copas Del Roy,three UEFA Champions league,one FA community shield,one Spanish Super Cup,One UEFA Super Cup and two Fifa Club World Cups.
Ronaldo began his club playing Career for Sporting Lisbon in Portugal from August 2002. From 2002- 2003.He appeared 2 times and scored no goal.He began his youth career in his Native Country Portugal in 1992-1995 for Andorinha,no record was made about his goals there.From 1995- 1997 for Nacional at his native Country ,no record was made too.
He joined the Sporting Lisbon senior side at the same time from 2002- 2003,he scored 3 goals after 25 appearances.
From 2003,he joined Manchester United when Sir Alex Ferguson discovered his rare skill and talent at Sporting Lisbon.Christiano signed for United at the age of 18 for 15 million pounds.
From 2003- 2009,during his time as a Manchester United Player,he made 196 appearances and scored 84 goals.
Christiano Ronaldo was the world's most expensive Player when he moved from Manchester United to Real Madrid in 2009 in a transfer worth 80 million pounds(94 million pounds/132 million dollars).His buy out clause is valued at 1billion pounds.
Since 2009 when he joined Real Madrid Football Club till date,he has scored 260 goals under 236 appearances.
He is the only player in May 2012,to score against every team in a single season in La Liga.He holds the record for most goals scored in a single UEFA Champions league season having scored 17 goals in the 2013- 2014 season.Christiano Ronaldo is the only player in the history of football to score 50 goals in a season of 6 consecutive occassions.
In September 2015,he became the all time top goal scorer in the UEFA champions league and in October 2015,Ronaldo became Real Madrid's all- time leading goal scorer. He is the secound highest goal scorer in l a liga history behind his perceived career rival Lionel Messi.
For his international Career with Portugal,Ronaldo is the first Portuguese Player to reach 50 international goals,making him Portugal's all -time top scorer.He scored his first international goal in Euro 2004 aand helped Portugal reach the final.Christiano Ronaldo became Captain of the Portugal National team in July 2008 and he led Portugal to the Semi-finals at Euro 2012.He finished the competition(Euro 2012) as joint -top scorer.
In November 2014,Ronaldo became the all-time top scorer in the UEFA European Championship (Including Qualifying with 23 goals.
Both Lionel Messi and Christiano Ronaldo are great footballers,they are the best in their generation and will continue to dominate World Football until after the Russia 2018 World Cup or beyond.
Lionel Messi has scored more goals than Christiano Ronaldo.Messi has got more awards than Christiano Ronaldo. What makes Christiano Ronaldo different from Lionel Messi is that Ronaldo has been able to distinguish himself as a fantastic player in three football clubs,while Messi at one(Barcelona).
The rivalry between Christiano Ronaldo and Lionel Messi is been aggravated by their fans and admirers who sometimes takes thing out of proportion,and cause havoc amongst themselves.
The Players(Messi and Ronaldo) see themselves as sportsmen who are performing their duties on the field of play.
So,Who is the Best amongst them is irrelevant to them. They are both great footballers and the best to have come out in the world of football.

Posted by Segun Adegoke at 07:19 No comments: